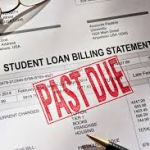 Whether you are a surgeon, an accountant, a hairstylist, or are in any of the scores of occupations which require a professional license in Illinois, it no doubt took a lot of work and commitment to get where you are. It’s also likely that it cost you some money. If that money was in the form of student loans, know this: all of your hard work can be for naught if you fail to pay those debts. Illinois is one of 20 states that can strip you of your professional license for defaulting on student loan obligations.

A recent story in the New York Times shined a spotlight on this practice, one which theoretically threatens the livelihoods of millions of professionals across the country and thousands in our state. Student loan debt in the U.S. is astronomical, and default rates have been rising. By one estimate, there is currently $1.4 trillion in student loan debt outstanding nationally.

In Illinois, according to a recent report, 61 percent of graduates of four-year public and private colleges and universities from the class of 2016 had educational debt, totaling $29,271, on average. That report doesn’t include debt incurred to attend community colleges or technical and vocational schools.

The rationale behind denying or revoking professional licenses for unpaid student loans is that it will incentivize borrowers to make payments. But taking away someone’s livelihood because they can’t make payments on their student loans sets up a situation that does more harm than good. Punishing someone for an unpaid debt by taking away their ability to pay that debt is a grotesque catch-22.

Some States Are Harsher Than Others

According to the Times, their research “identified at least 8,700 cases in which licenses were taken away or put at risk of suspension in recent years, although that tally almost certainly underestimates the true number.”

The states that allow professional licenses to be denied or revoked for unpaid student loans vary widely in how aggressively they use this draconian tool. For example, according to the Times article, Tennessee’s professional licensing authorities took some form of action against 5,400 licensees for unpaid debt between 2012 and 2017. Conversely, licensing officials from states like Hawaii, Iowa, Massachusetts, and Washington say they do not take disciplinary action for student debt even though they have the statutory power to do so.

What is the Risk in Illinois?

Illinois law (20 ILCS 2105/2105-15) requires that the Illinois Department of Financial and Professional Regulation “deny any license or renewal… to any person who has defaulted on an educational loan or scholarship provided by or guaranteed by the Illinois Student Assistance Commission or any governmental agency of this State.”

While it is unclear how many Illinois licensees have been or remain at risk for debt-based disciplinary action, it appears that the IDFPR has not been particularly active in using its powers in this regard. But that could always change. If you are a licensed Illinois professional who has defaulted on your student loan debt, be aware that the career you financed with those loans could be threatened.